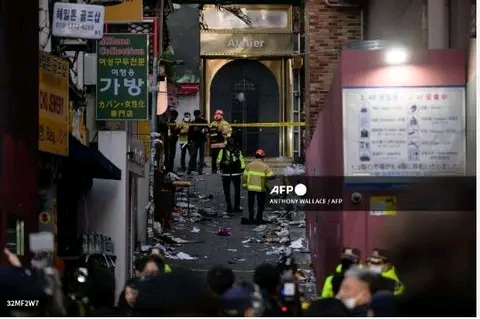 More than 150 people were killed in a stampede at a Halloween event in central Seoul on Sunday, October 30.PHOTOS: Over 150 Killed In Halloween Stampede In Seoul

The South Korean president, Yoon Suk-yeol, has promised a thorough investigation into one of the country’s worst-ever disasters.

According to reports, the crowd surge and crush hit in the capital’s popular Itaewon district, where estimates suggest as many as 100,000 people — mostly in their teens and 20s — went to celebrate Halloween on Saturday night.

President Yoon Suk-yeol declared a period of national mourning Sunday, telling the country in a televised address that “a tragedy and disaster occurred that should not have happened”.

He said the government “will thoroughly investigate the cause of the incident and make fundamental improvements to ensure the same accident does not occur again in the future.”