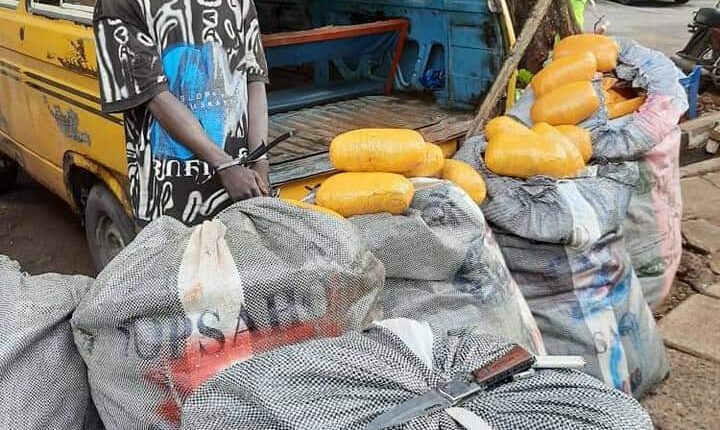 The Lagos Police Command has through Rapid Response Squad (RRS) operatives intercepted 10 bags of Cannabis worth N3 million from drug dealers during a patrol in Surulere axis of the state.

As gathered, the drug peddlers sealed it in different sacks, in other to evade arrests from law enforcement agencies while transporting the items to their customers.

Aside, the seized drugs were being transported by a commercial bus driver, Amodu Agbaje, and two others, who were currently at large after sighting the policemen.

Agbaje was said to have been apprehended after two other suspects in the vehicle took to their heels and left the items in the driver’s vehicle.

As disclosed by the Lagos Police command spokesman, Benjamin Hundeyin, on Sunday, the suspects ran out of luck when vigilant RRS operatives on routine patrol stopped the bus on Friday at Stadium Bus Stop, Surulere.

Through a statement made available to newsmen, Hundeyin stated that during interrogation, Agbaje, who was arrested confessed that he was to be paid N25,000 after delivering the consignments to its destination and that the drugs were worth N3 million.

According to the statement: “While two occupants of the vehicle escaped, the driver, Amodu Agbaje, was apprehended. The arrested driver claimed he was offered N25,000 to convey the drugs with street value of N3 million.

“The Lagos State Commissioner of Police, CP Abiodun Alabi, has directed the Commander RRS, CSP Olayinka Egbeyemi, to transfer the suspect and the exhibits to the Command Headquarters for further investigations.”